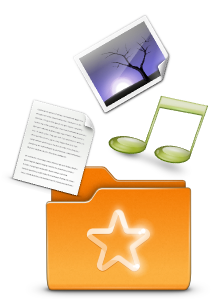 You can install the package from your distribution (likely old and not updated often), but we recommend to get our Flatpak with automatic updates to always enjoy the latest and greatest:


How does it work?

SparkleShare creates a special folder on your computer. You can add remotely hosted folders (or "projects") to this folder. These projects will be automatically kept in sync with both the host and all of your peers when someone adds, removes or edits a file.

What's it good for?

SparkleShare was made to cover certain use cases, but doesn't handle every scenario well. To help you decide if SparkleShare is right for you, here's a few examples of what it does well and less well with smiley faces:

For more information on usecases, read the wiki.

Setting up a host

SparkleShare uses the version control system Git under the hood, so setting up a host yourself is relatively easy. Using your own host gives you more privacy and control, as well as lots of cheap storage space and higher transfer speeds. We've made a simple script that does the hard work for you:

That's all there is to it. Since SparkleShare uses plain Git repositories, you can keep using all your favourite tools that work with it. For example, for more sophisticated hosting, including team management and access control, check out Gitlab.

If maintaining your own host isn't for you, there are also existing project hosting sites like Github or Bitbucket that are compatible with SparkleShare (keep in mind your projects will be public unless you're on a plan, respective Terms of Service agreements apply).

The idea of SparkleShare sprouted at the GNOME Usability Hackfest in London, where a couple of designers came to the conclusion that they didn't have a good (Open Source) collaboration tool to share their work (for more background, read “The one where the designers ask for a pony”). They didn't like how the good collaboration tools were proprietary, and that using them meant having to give up privacy, control and other rights. What they needed was something that they could run and control themselves, without having to depend on other companies.